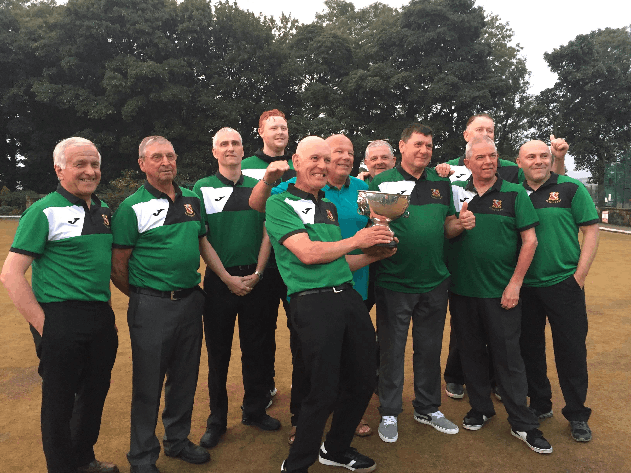 Elland C. A. & B. C. won the Halifax Association's Rose Bowl Competition, sponsored by SDH Holdings at Sowerby T. & B. C. On Friday. In a tense finish, they defeated Luddendenfoot by 229-225. Elland were giving five start to their opponents but only one point divided the two sides after the first four games.

Steve Bridges gave Luddendenfoot the ideal start, leading by14-7 against Stuart Rodd before eventually winning by 21-13. That gain was cancelled out immediately as Steve Kenworthy recorded Elland's first success with his 21-12 against Phil Brown. In a tight contest , Ian Archibald and Lewis Robinson were locked together on 12, 15, 16 and 17 before Archibald added another Elland victory , by 21-17.

Luddenden foot's John Halliday trailed by 2-9 against Jim Balmforth, recovered to lead by 19-12 but had to hang on as Balmforth fought back to level at 20 before Halliday could scrape home by a single chalk After Luddenden foot's Ben Halliday had recovered from 1-9 and 13-16 to win by 21-18 against Steve Lowther, Russell Broadbent gave Elland's chances a major boost with his 21-9 against Gavin Brumby.

Paul Fisher led Danny Balmforth by 8-0 but fell behind by 14-16 before running our to win by 21-16 and keep Luddendenfoot in the game. In another tight game, Adrian Kenyon came from 13-16 down to win by 21-19 against Johnathan Robinson, giving Elland a five point lead with two games remaining.

Elland seemed firm favourites at this stage as Tony Dubaj led Gareth Swain by 17-11 but the Luddendenfoot captain fought back to run out with a break of 10 to reduce the Elland lead to a single chalk.

The final game, between Elland's Nigel Mitchell and Andy Gallagher had been one of changing fortunes. Mitchell led by 10-2, and 14-10 before Gallagher went ahead by 16-14. As the game drew to a close , the match could have gone either way or ended in a draw but it was Mitchell who finished the stronger to win by 21-18, securing victory for Elland.